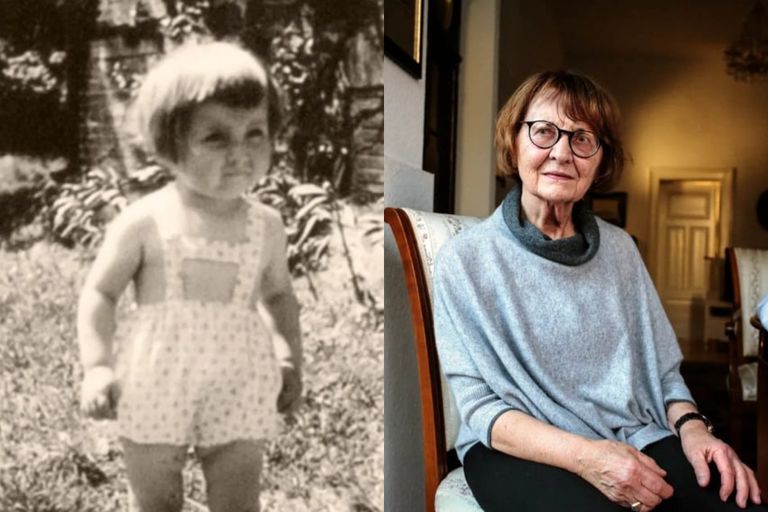 
When Ingrid von Oelhafen was three years old, and Germany was experiencing the chaotic aftermath of World War II, her parents separated and she ended up in a children’s home. “It was Christmas the day I arrived and in a huge hall with many wooden tables they were giving gifts. There were walnut and orange cakes. It must have impressed me a lot because I remember it vividly,” he recalled.

But that pleasant memory was the prelude to a sad time. Although her mother was “not very warm”, Ingrid was desperate to live with her, as her letters from the time reveal: “I always cry if someone talks about you or if I think about you. Dear, dear mommy, please come pick me up.”

When Ingrid was 11 years old, his father reappeared in his life. One day he took her to a medical appointment where, to her surprise, they called her Erika Matko. “I didn’t know who it was, but I didn’t ask,” he said.

He soon began to realize that this was the name that appeared on all his official documents. He didn’t dare talk to his father about it, but he did talk to his housekeeper: “She told me that I wasn’t my parents’ biological daughter, and that no one really knew where she was from. I didn’t want that to be true.”

At the age of 13, one of Ingrid’s greatest wishes came true: finally he went to Hamburg to live with his mother, who had started another relationship and the couple had a son. “I was very excited, but when I moved I realized that the idea I had of my mother was just an illusion,” she recalled and added: “I didn’t feel accepted.”

Ingrid never mentioned the name of Erica Matko, nor that his mother was not his biological mother, but a year later he faced something that increased his bewilderment.

“I remember standing on a street corner and there were many posters red cross organization with pictures of children… and I saw my own face. i was stunned. My body was paralyzed”, he said and added: “The photos were of children displaced by war or taken from their homes and the Red Cross was running a campaign to reunite them with their families.”

And there she was, portrayed much younger. But she didn’t feel able to talk to her family about it: “No, no, no. It was a big secret. I felt I had to protect myself.”

Ingrid forged a career as a physical therapist and built his life without knowing who Erika Matko was: “My physiotherapist diploma had that name. It couldn’t be changed.”

In 1999, when he was 58 years old and running his own physical therapy practice, he received a call from the Red Cross asking if he was interested in knowing about his parents. “I immediately said yes, that I wanted to visit them, but the Red Cross stopped that idea. Instead, they put me in contact with a historian to help me find out a little bit about my history,” he said.

Meanwhile, he reviewed some documents he had found, and noticed something unusual: “I had a chickenpox vaccination form. The document was signed by a Nazi, Dr. Hesch, and had my name, date and place of birth, and said I was a German citizen. But also had the word Lebensborn”.

He had never heard of it, so he looked it up online. Any. He continued to search the library archives, until he found the following description: “The purpose of Lebensborn is to accommodate and care for racially and genetically valuable pregnant women, who, after careful investigation of their families and those of the children’s parents, can be expected to give birth to equally valuable children.”

“I found the idea repugnant. And I could not imagine that I could be one of those children, “he said. In his hair-raising quest to create a so-called “superior race”, while killing as many non-Aryans as possible, the Nazis also began projects to bring new Aryans into the world.

“Lebensborn was a program of the SS – a paramilitary wing of the Nazi Party -, and it established homes for so-called Aryan mothers, who were also carried children stolen from Poland, Norway and Yugoslavia, with the purpose of Germanization”, he pointed out and detailed: “They selected blond babies with blue eyes.”

Meanwhile, the historian helping him concluded that he came from what is now Slovenia. Ingrid wrote to the Slovenian authorities, asking if they had any information.

“I received a document saying that my mother’s name was Helena and my father’s name was Johan Matko and that they once had a daughter named Erika. I was so happy…it was an amazing feeling!”, He told about that find. But shortly after, he received a second letter saying that the couple’s daughter, Erika Mako, was alive and in Slovenia, so it couldn’t be her.

“It was horrible”. Ingrid managed to locate that other Erika, but she didn’t want to meet her. However, other family members, including her nephew, agreed to talk to her and agreed to do a DNA test: “The results showed that I was more than 90% related to this family.”

They also showed that there was a 93.3% chance that Ingrid was the aunt of Erika Matko’s nephew, so the other Erika was probably not the original. “I read the document and thought: ‘I belong’. I have family. I wrote to the other Erika, but I never got a reply.”

“On the one hand, I was very happy to have found my family. But I also wondered how that other Erika had gotten into that family, and worried that I was driving her out. Y, why did my family never look for me? It was a very confusing puzzle”, he wondered before such a labyrinth.

It would be more years before the final pieces of that puzzle fell into place. That happened when Ingrid finally managed to access a file of Nazi documents. There, they reveal that Ingrid’s biological father, Johan Matko, he had been a resistance fighter fighting against the Nazi occupation of Yugoslavia.

After being caught, he was sent to a concentration camp, and in August 1942 her mother was ordered to take her three children, including a 9-month-old Erika, to a local school. “My mother took us all to school and a truck with German soldiers arrived. The children were separated from their families.”

Erika was a plump baby with blue eyes, blonde hair: the Nazis decided to take her to Germany. His brothers were sent home with their mother. But this is where the documents get confusing. “They show that Erika Matko was taken as part of the Lebensborn program, but also they say that my mother arrived with three children and left with three children”, he explained.

So the other girl was the daughter of another family. She was raised by Ingrid’s biological parents. who not only gave her the name of Erika Matko but, even when the war ended, they never picked up their biological daughter or revealed that the one they had was not.

“For a while, I hated them, especially my mother. How could he have left me and not come looking for me? But afterwards I thought that he had had a difficult life with the Nazi occupation first, and the communist regime that followed. Rationally, I could probably try to understand her, but psychologically, I always felt like she should have looked me up.”

There are still many unanswered questions. But Ingrid is “Happy to know more about myself and what happened.” “And I have met so many wonderful people in Slovenia that sometimes I can imagine that I grew up with them,” he argued. As a trained physical therapist, Ingrid has dedicated her career to working with disabled children… children who were excluded from the idea of ​​the Nazi “master race”.