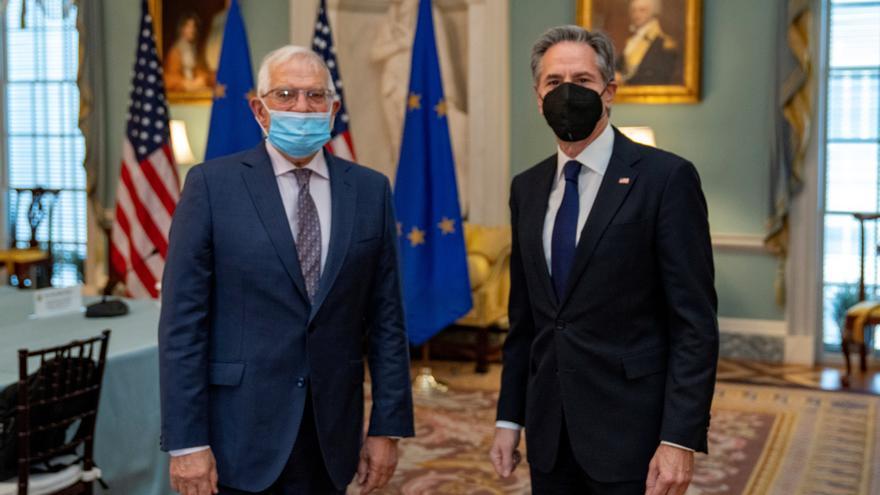 
The European Union Y U.S have committed themselves again this Monday to work together to guarantee the supply of natural gas in Europe Given the uncertainty generated by the crisis in Ukraine. Its highest representatives in foreign policy have accused Russia to use the gas as “geopolitical weapon” in the fight it wages with the West to demand security guarantees regarding the expansion of NATO, a strategy that has resulted in the deployment of more than 100,000 Russian soldiers in the immediate vicinity of the Ukrainian borders. The International Energy Agency He maintains that Moscow has reduced gas supplies to Europe in recent months, contributing to the escalation of prices.

The announcement to guarantee the flow has occurred during the bilateral meeting of the Energy Council, in which the US Secretary of State, Anthony Blinken, and its European counterpart, Josep Borrell. “The EU and the US intend to work together to ensure that the global liquefied natural gas market (LNG) is capable of providing additional and diversified supplies in the event that the flow of gas is disturbed in the short term,” said the draft agreement, advanced by Reuters.

Since the end of last year, Brussels has intensified its efforts with Qatar, Norway The Azerbaijan to increase gas supplies to the continent in the face of the possibility that Russia could cut off supplies if the crisis in Ukraine ends up leading to an invasion. Moscow denies such intentions, but the EU, which receives 40% of its gas from Russia, wants to cover its back in case the worst scenario materializes.

Increase in US exports

For the moment, the The most benefited country seems to be the USA. European LNG imports broke all records in January. 45% of the supply transported in methane tankers came from North America. “This is truly a pivotal discussion and one that couldn’t be more timely,” Blinken said during the meeting in Washington.

The agreement between both partners to cooperate on energy matters had been in the making for weeks. On January 28, the President of the European Commission, Ursula von der Leyen, and the president of the United States, Joe Biden they have already announced their intention to “intensify energy cooperation” to ensure that European businesses and citizens “have reliable and affordable energy supplies”.