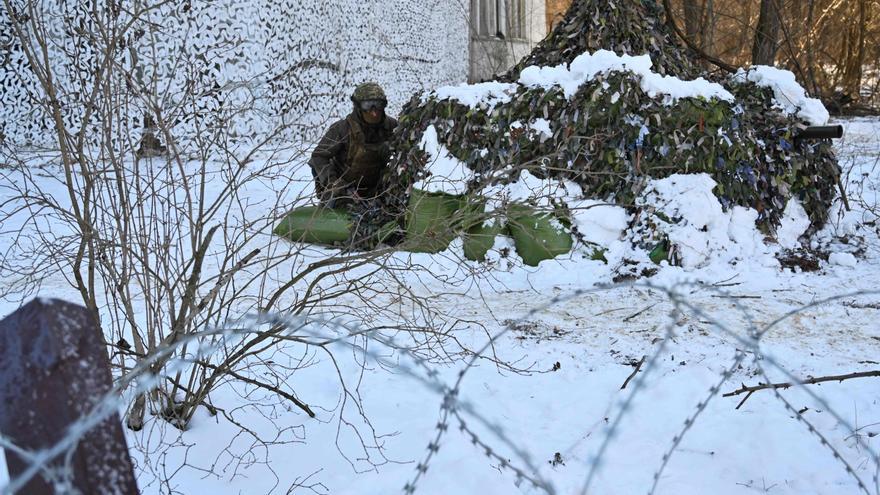 Ukrainian soldiers prepare for war in a deserted city near Chernobyl

soldiers of the Ukrainian National Guard prepare for war in Pripyat, a deserted city from the Chernobyl nuclear disaster in 1986. Ukrainian forces on Friday fired on abandoned buildings and launched grenades and mortars during urban combat drills, which were held against a possible Russian invasion.

A special radiation control unit performed security checks to ensure that there were no radioactive sources, before and during combat exercises. Special forces, police and national guards exercised on snowy streets near abandoned Soviet hotels and buildings, some of which still displayed the Soviet hammer and sickle emblem.

The soldiers, dressed in camouflage suits, practiced evicting armed attackers from buildings, firing mortar fire and how to deal with snipers in an urban context. For their part, the emergency services mounted evacuations and put out fires caused by the fighting.

“Since there are no civilians around here, we can do the exercises with live ammunition, in a situation as close to urban warfare as possible,” said a soldier who identified himself as Litva.

Ukraine has carried out various drills in preparation for a Russian military offensive, which has concentrated more than 100,000 soldiers near the Ukrainian borders in recent weeks. Russia denies planning an invasion but demands security guarantees, including a promise that NATO will never admit Ukraine.

The Ukrainian Minister of the Interior, Denys Monastyrskiy, pointed out that the soldiers are preparing for the threat of uniformed infiltrators who could take over buildings and destabilize the country and insisted that the internal destabilization is your biggest concern. “We have to show our ability to react to any event,” Monastyrskiy said.

Regarding a possible invasion, the defense minister, Oleksiy Reznikov, downplayed the possibility of an incursion by Russian forces from Belarus, pointing out that the “several thousand” Russians across the border are not enough for an attack. He also mentioned the difficult terrain as an obstacle, in addition to the radiation hazard if they try to pass the exclusion zone towards Kiev.

“This area is very difficult to cross. Forests, swamps, rivers… it is difficult to cross on foot, even more so with a tank,” Reznikov told journalists summoned to the exclusion zone to observe the exercises, while recalling that from the chernobyl disaster “Some highly radioactive areas remain on the route from Belarus.”

Last year, on April 26, Ukraine marked the 35th anniversary of the chernobyl disaster, when a reactor at the nuclear power plant located about 108 kilometers north of Kiev exploded during a failed safety test. The result was the world’s worst nuclear accident and sent clouds of radiation over much of Europe.

The catastrophe caused death of 31 workers plant personnel and firefighters, most from acute radiation sickness. Thousands more people subsequently succumbed to radiation-related illnesses such as cancer, although the total number of deaths and the long-term health effects remain a matter of debate.

Most of the area around the abandoned nuclear power plant it is a desert of empty buildings, brush and rubble. In Pripyat, a city now used by Ukrainian soldiers to train, there were 50,000 people who, for the most part, worked at the plant.